My husband and I rolled up to the animal shelter in our little blue convertible, looking for a feline brother or sister for the kitten we had adopted just a few months before.

There were lots of kittens. Lots of them. But the moment we spotted the long-haired mutt of a cat with the corkscrew tail, our search was over.

We took the meowing ball of fluff home and spent the next few weeks trying to keep the older cat from killing him. It was so bad, we thought about taking him back almost daily for a while.

But eventually, peace returned to the household and the fluff ball (now named Kiwi) earned himself a permanent place on my lap and in my heart.

He’s been my constant companion ever since.

He stuck to me like glue through the worst of my depressions. Purred me back to health after three surgeries and countless broken joints and bones. He shared my lap through hundreds of late night Tori feedings and shared my desk through dozens and dozens of marathon writing sessions.

Heck, he even learned to say “mama,” in the same tone and with the same inflection as my young daughter. It was so eerily similar that I often couldn’t tell which one was calling me (and neither could  my husband).

He was my baby in every way that matters.

And last week he died.

It was time. He couldn’t eat anymore. Couldn’t walk more than a few steps. Couldn’t even seem to sleep. Every time I looked at him, he was staring at me with preternaturally green eyes.

I knew in my heart that it was time for him to leave. I’d been telling him to let go for days.

But it still hurts.

We will get another cat. And I will grow to love him or her. But no one will ever take Kiwi’s place.

I miss that special little guy. I miss him a whole hell of a lot.

When issuing the news that I was going to have a baby, I got lots of hugs, heard lots of squeals and fielded lots of excited questions. But I also saw the sideways looks. The ones that said, “She? Is going to be a Mommy? That’s a little scary.”

I had a bit of a reputation for being a drama queen. And a klutz. And, I might as well admit, a little self absorbed. The people around me wondered if I’d be able to rise to the challenge of being a mother.

Well, it’s only been a little over six months, but I’m told that so far, I seem to be doing a decent job. But that doesn’t mean I’m any less scary. I’m sure I could come up with hundreds of reasons that I deserve the title, but I doubt any of you have the stomach to hear them all.

So, instead, here are the top ten reasons I deserve to join the ranks of Scary Mommies.

Being the exhausted mother of a small child has only enhanced my klutziness. I’m constantly tripping over my feet, bumping into immovable objects, and, of course, falling. I made it a whole six months without crashing with Tori in my arms…but that was it. Fortunately, she wasn’t hurt, for which I count my lucky stars, but it’d be better for all of us if she learns to walk early.

I have been known to (gasp) nap with her in my arms. Every new mom is told countless horror stories of parents who sleep with their children, only to accidentally suffocate, or worse, crush them while they doze. But for a long while there, the only way I could get any Zs at all was if I cuddled her close to me. And now? Now, I just crave the closeness. There’s nothing like the feel of a sleeping baby to send you off to dreamland.

It’s awfully hard to stay awake during those late night feedings. I admit it. I’ve occasionally (okay, maybe slightly more often than that) drifted off to sleep while feeding her. Then I start awake, the bottle dripping down the side of her face and on to her sleeper. Luckily, she usually falls asleep too…

Speaking of feeding, I didn’t breastfeed her. I tried. Oh, how I tried. But Tori? Was having none of it. When I gave her my boob, she would scream and scream and scream until I felt like screaming too. Finally (although far too soon according to the Breastfeeding Nazis), I gave up. It was either switch to bottles or go insane, and I chose sanity. I’m told that automatically makes me a bad, if not scary, mommy.

I routinely subject her to ridiculously long photo sessions. Growing up, no one seemed to know where any of my baby pictures were. In fact, my brother assured me the lack of photographic evidence was proof that I was adopted. So Tori? Constantly has a camera in her face. 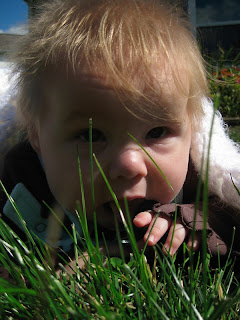 But seriously, with a mug like hers, how could I resist?

I have an unhealthy obsession with dressing her in cute clothing. Have you seen the adorable baby clothes out there?  And they’re cheap, too (at least the brands I buy). The poor kid sometimes gets her outfit changed three or four times a day, just because I like to giggle over how ridiculously cute she is. It’s no wonder she’s developed a tendency to fuss whenever I put her on her changing table.

My own appearance has taken a turn for the worse. Leaving the house in mismatched socks and without makeup isn’t exactly a new thing. But now that the majority of my morning is devoted to caring for her, I often later find that I’ve neglected to do something essential—like put on deodorant, or properly button my shirt. My hair hasn’t been cut since I went back to work, and my eyebrows? Well, let’s not talk about my burgeoning mono-brow. I only hope I can get it together before she’s old enough to notice.

I’ve become one of “those” mothers. You know the ones. The ones that are convinced that their babies are, in fact, the smartest, most advanced infants to ever walk, er, crawl, er, roll on the face of the earth? Yeah, that’s me. I swell with pride at every check-up when the doctor tells me she’s doing things that are months beyond where she should be. I think she’s the next Einstein. Only she’ll have better hair.

I just can’t get enough of her. When I’m away too long, I get an actual, physical craving for the feel of her little body. I need to see her smile to keep my sanity. In my cube, I have a bulletin board dedicated to pictures of her…a coworker recently told me I might be a wee bit obsessed. She’s like crack, that baby is.

I’m actually considering inflicting my mothering abilities on another baby. Not any time soon, of course. But she’s brought so much joy into my life, I can’t help but think that giving her a brother or sister? Might actually be the best idea I ever had.

And that’s why I’m a Scary Mommy. Anybody still with me? Because I could go on…Just kidding. I won’t. That would be really  scary. Now head on over to the real Scary Mommy’s blog, and tell her that I should win her Scary Mommy contest.

After all, if I win that Flip camera? I can post all kinds of adorable videos of my gorgeous kiddo. Or not. If you’d rather I didn’t.