Last year, when winter failed to arrive, I worried. I worried about global warming, about my not-as-fuel-efficient-as-it-could-be car, about my less than stellar recycling efforts…

I worried winter would never return.

That we had entered the beginning of the end (not in a religious sense. Just in an environmental sense).

I even found myself wishing for snow.

Well, guess what? Winter remembered where it lives this year. We’ve had snow, freezing cold temperatures, and day after day of  gray, sunless days.

And now I remember how much I hate winter.

I really, really hate it.

It saps the energy from my bones. The happiness from my day. And the words from my brain.

Did I mention I hate winter?

I’d be happy to hibernate until spring, but unfortunately, humans aren’t wired that way.

So instead I’ll whine and moan and groan the days away. And eventually? Spring will come again.

Okay, guys. I admit it. I’m still relatively new to this whole parenting thing, and so may not fully appreciate the wonder that is a television show that holds a rug rat’s interest for a whole thirty minutes. But Yo Gabba Gabba? Creeps me the heck out.

I mean, dudes, those characters are scary. Just look at ’em: 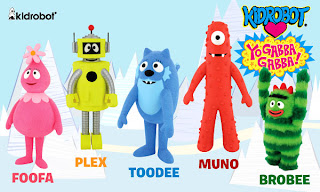 Tell me how Muno, the six-foot tall dildo, is supposed to make me feel warm and fuzzy inside? If you ask me, Brobee looks like something straight out of a technicolor nightmare, as does Toodee. The only one who gets any cute points at all, in my humble opinion, is Foofa, and from what I’ve seen, she doesn’t get as much screen time as some of the others.
And as for DJ Lance? Well, picking on him is just too easy. So I won’t. Besides, you’ve got to respect a grown man who isn’t afraid to run around in an orange jumpsuit.
Now, I’ve heard that the music is what makes the show so attractive to young and old alike, but for the most part, the songs they sing make me want to shoot myself in the ear so I never have to hear them again. Especially this one:
After I watch this, there’s no party in my tummy. Maybe a little vomit in my mouth, but that’s not the same thing. And sure, it is pretty catchy (I’m sure I’ll be singing it until I want to bash my head in), but that’s not always a good thing.
Nope, for shows featuring culturally relevant music, I think my house is going to rely on good old Sesame Street.

How can you not laugh at that?

I’m sure I’ve outraged a good number of you (this Yo Gabba Gabba thing seems to have achieved crazy cult status), and maybe have even tempted a few of you to hit the un-follow button, but I hope we can still be friends.

Who knows. Maybe a few months from now, someone will have forced the magic koolaid down my throat, and I’ll be wanting Muno to be my daughter’s first boyfriend. But for now? I’d like to keep them as far from me and mine as humanly possible.

I won’t lose my official Mommy Card for that, will I?