I hate bugs. All bugs. Mosquitoes, bees, wasps, spiders, ants…they are all, in my humble opinion, of the devil. But as much as I hate these beasties, for the most part I’m willing to subscribe to a live and let live policy.

Unless, that is, said insect is one of these: 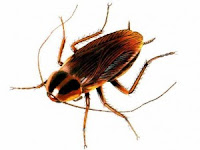 Upon seeing one, I scream loudly and begin gibbering incoherently as I run away as fast as my chubby little legs can carry me, looking for something, anything (preferably a man-shaped being like my husband) to kill the damn thing.

Fortunately, growing up in Michigan I didn’t encounter the little buggers very often. Once, a cockroach came home from the grocery store with me (I never shopped at that store again, incidentally), but for the most part, my life was cockroach-free.

Which left them free to become the flesh-eating monsters of my imagination, prone to swarming over the sleeping bodies of unsuspecting humans and eating them alive.

So you can imagine my horror when, a few weeks after moving into my first home in Southern Indiana, a six-inch long Beast From Hell jumped out at me from an upper cupboard.

Okay, so maybe it wasn’t six inches long. But it was big. Really big. And it had been nesting in my cereal bowls.

Worse yet, when I came back to kill it (we’ve already discussed my tendency to run screaming at the sight of them), it was gone.

That realization set off a frantic cleaning frenzy where every dish, pot, pan and piece of silverware got itself dunked in bleach and boiling water. After all, cockroaches carry all sorts of nasty bacteria—bacteria which can give you assorted diseases and render you sterile (okay, not really. But still).

I hoped that was the end of the cockroach infestation. But it wasn’t.

Over the next few months, every time I let my guard down, the little beasties would return. Sometimes I’d see another big one crawling out of some dark corner in my kitchen. More often, I’d find some of their smaller cousins hanging out by the front door.

Each sighting resulted in a total meltdown.

I’d go through the house with a fine-tooth comb (sobbing incoherently), sure that if I got rid of every speck of dirt, they’d leave us alone. I’d make frantic calls to my landlord, begging him to come bomb the house again. I’d even wake myself up in the middle of the night, grab a can of Raid and creep out to the kitchen, throwing the light switch on as I held it in front of me like a weapon, fully expecting to see a swarm of the little critters dancing on the tile floor (I never did).

When one morning I saw one staring back at me from the sink drain when I bent over to wash my face, it was over.

Although I loved that house, adored my neighbors and thoroughly enjoyed the gorgeous park that was within walking distance, I couldn’t stay there. Within two weeks, my husband and I had put a deposit down on a brand new home—one we built from the ground up.

It was the only way I could be certain that there weren’t any cockroaches already in residence.

It’s been almost three years now and my home is still Hell Beastie free. But I still stand guard, can of Raid at the ready, waiting to kill the first one that dares show its ugly face.

So that’s my irrational fear. Now tell me one of yours. Or better yet, head over to Mama Kat’s and see what the other workshoppers have to say for themselves.